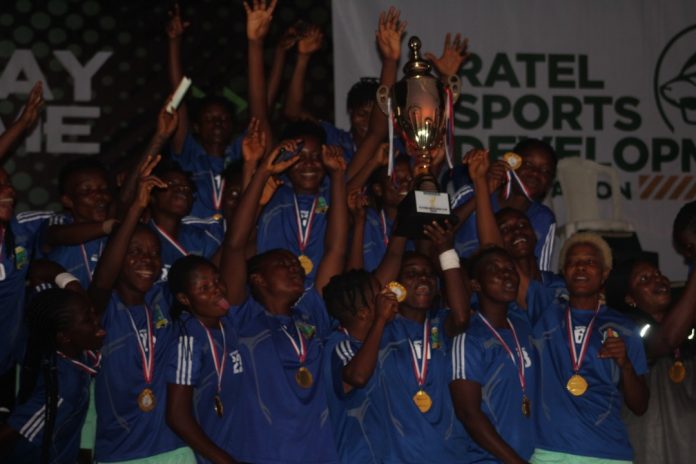 Bayelsa Queens have emerged as the Champions of the second edition of the Flying Officers Cup after they defeated twice finalists, Nasarawa Amazons 1-0 in the grand finale of the tournament played at Guards Brigade Stadium, Abuja on Sunday.

Another major highlight of the final day of hostilities was the observance of a minute silence in honour of the late Flying Officer, Tolulope Arotile.

Bayelsa Queens and Nasarawa Amazons had met during the group stage and the tie ended goalless but in the final it was the Restoration Girls that showed the intention and the willingness to carry the day. It was no wonder they got the curtain-raiser in the 16th minute through Barakat Olaiya and it was how the game ended.

Nasarawa Amazons who won the 2019 Aiteo Cup competition atepped up their game in a bid to get the equaliser that could force another penalty shootout but Bayelsa Queens who were the winners of the NWFL premiership in 2018 were unyielding to all their foes forays into their vital area as they cleared up all crosses and inswingers into their 18 yards box.

It would no doubt be an harrowing experience for Nasarawa Amazons who were finalists in the inauguration edition of the tournament last year but lost to Edo Queens on penalties before this latest defeat again.

Earlier in the third-place match, the deposed champions, Edo Queens grabbed the third place after a 4-3 penalties win over Naija Ratels.

Naija Ratels did all to curtail the rampaging Edo Queens who had earlier beaten them 1-0 in the last group match and they succeeded in securing a goalless draw at the end of the 90 minutes but they were unlucky in the ensuing penalty shootout and had to settle for a fourth-place finish.

As Champions, Bayelsa Queens will go home with a trophy and N500,000 prize money.

Second-placed Nasarawa Amazons will also go home with N300,000 prize money for their efforts, while Edo Queens will hold on to N200,000.