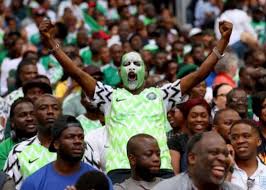 A certain percentage of fans will be permitted to grace the CAF Champions League preliminary round, first leg tie between Plateau United and Simba SC of Tanzania, www.dasportstainment247.com can report.

It has not been established if the Presidential Task Force on Covid-19 and the National Centre for Disease Control(NCDC) granted Plateau United this luxury but a press release from the club’s media department confirmed that about 30 percent of the fans would be allowed to watch the game billed for the Jos Road Stadium in compliance with the Covid-19 protocols.

The PTF and the NCDC barred fans from watching the Super Eagles face the Leone Stars of Sierra Leone in AFCON qualifier this month and even though contact sports have been permitted to returnn, it was clearly stated that games must be played devoid of fans.

The team which landed at the Yakubu Gowon Airport , Heipang , Jos aboard a Max Airline at exactly 5:07pm, were received on arrival by the Chairman of the Plateau State Football Association Sunday Longpab in company of other members of the Association and Some management staff of Plateau United.

The 46 man delegation of Simba SC which arrived Nigeria through the Nnamdi Azikiwe International Airport , Abuja Wednesday, was led by Ahmed Msafiri Mgoyi in company of the Tanzanian Ambassador to Nigeria, Dr. Benson Bana Tzambassadir.

The delegation which comprises 30 players , technical crew , the Chief Executive Officer of the club as well as other backroom staff lodged at Valadar Hotel and Lamonde Hotel which is not far from each other.

Despite the arrival of their advance party injj Jos , Simba could not secure one accommodation for their entire contingent due to the National Festival of Arts and Culture NAFEST presently going on in Jos the Plateau State capital.

Simba SC further compounded their woes after the failed to revealed their travelling plans to the Nigeria Football Federation NFF, who would have helped them in that regard.

The team is expected to have a work out at the Jos international stadium Saturday afternoon in order to have a feel of the playing turf before the encounter on Sunday.

The match which is expected to kick off by 4pm would only be watch by 30 percent fans in strict compliance with the Covid-19 protocol as stipulated by the National Centre for Disease Control and the presidential Task Force on Covid-19.