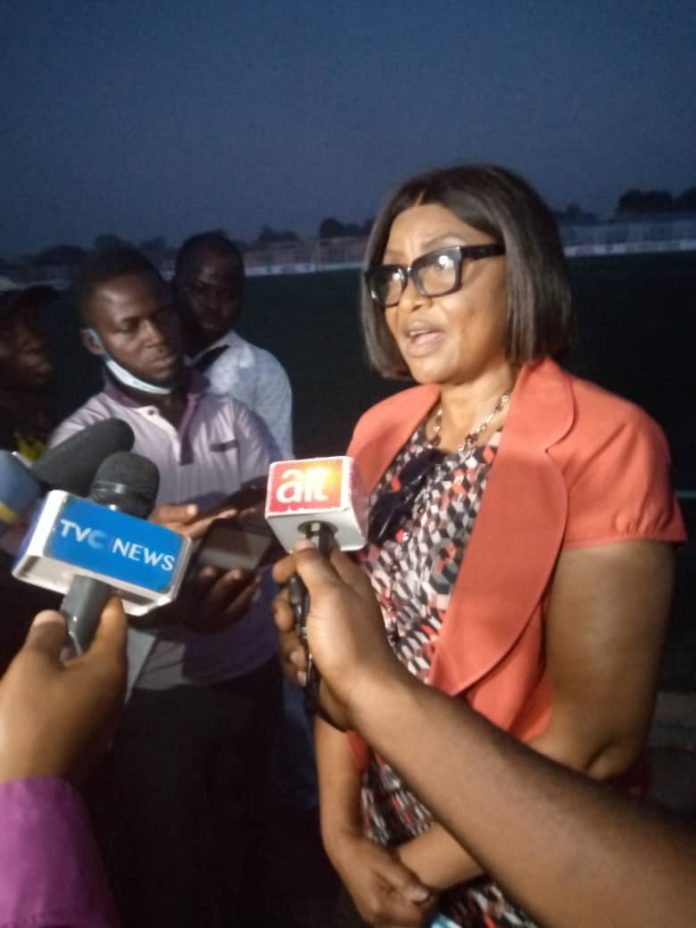 The Chairperson of the Nigeria Women Football League, Aisha Falode, has sent a message of appreciation to the Nasarawa State government for the hosting of the official league opener for the 2020 NWFL Premiership season, at the Lafia City Stadium on Wednesday.

Falode, expressed her delight at the excellent conduct of all the government officials assigned to the event.
“We are most grateful for the wonderful hosting given us by Nasarawa government officials, the state’s Commissioner for Sports was awesome, same as the FA chairman, the Chairman of Nasarawa United and Chairperson of Nasarawa Amazons.
“We were honoured by the treatment given us by the First Lady of Nasarawa State, Hajia Silifat Abdullahi Sule and the wife of the Deputy Governor, Mrs. Sheila Tosan Akabe, with their powerful delegation that also included the Commissioner for Women Affair that represented the Honourable Minister for Women Affairs, Mrs. Pauline Tallen.

“We appreciate the Minister of Youth and Sports, Sunday Dare, who was represented at the league opener by his Special Adviser, Mary Onyali. The NFF General Secretary, Dr. Mohammed Sanusi stayed with us all through the game, and we say a very big thank you to the representatives of our new partners the United Nations Women for #Safe Home Campaign#. We were honoured to have them partner the NWFL.”

The NWFL Chairperson, expressed her appreciations to players and officials of the two clubs ; Nasarawa Amazons and FC Robo. The referees too that did excellent job.

Falode, used the opportunity to appreciate the Edo State governor, Governor Godwin Obaseki, and his Deputy Governor, Rt. Honourable Philip Shuaib, for their presence at the Samuel Ogbemudia Stadium, Benin City where they helped the NWFL made history as the Edo Queens vs Royal Queens of Warri was played under floodlights.

“We are excited by the contributions of the Edo State government towards the development of women’s football league in Nigeria. We also appreciate the Bayelsa state government for their encouragement for the women’s league. The Governor, Douye Diri surprised us with his presence at the Samson Siasia Stadium for the Bayelsa Queens vs Sunshine Queens first game.