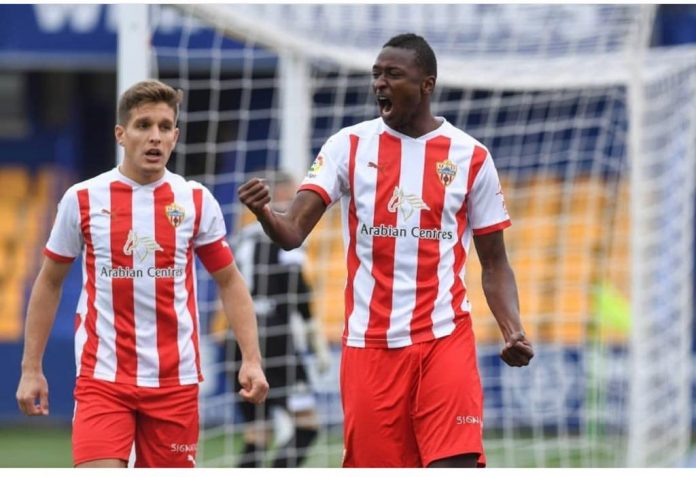 Former Under 23 Star, Umar Sadiq says his immediate priority is to continue doing well for his on loan club in the Spanish La Liga Smartbank, Almeria and ensure they pick pne of the slots to the La Liga Santander at the end of the season.

Sadiq has been in awesome for for the Spanish second division side this season with six goals in 17 games after he also had a commendable season with Partizan Belgrade whom he festered in the Europa League campaign with last season.

The Kaduna born attacker expressed his love for Ronaldinho and Daniel Amokachi who he reckons is close to being idolised in the North Central zone but he noted that excelling with Almeria and seeing them return to the topflight in Spain is concerns for now.

“Watching Ronaldinho back then was what I could not really imagine. I used to tell Maicon while in Roma to extend my greetings to him,” Sadiq said in an interview.

“As young boy that grew up in Kaduna, we always hear people talk about Garba Lawal, Tijani Babangida, Daniel Amokachi and when we see them around, you may be tempted to run after them to greet them. I always like to model my game around Amokachi. I didn’t get to watch him when he was still actively playing, but it was a pleasure getting to meet him because back then everyone talked about him in Kaduna.

“For now, I am focusing on my club career and we will see what happens.”