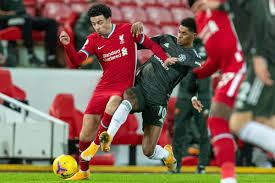 Manchester City will pay special interest in the fixture nearby at Old Trafford as it may confirm them as EPL 2021 champions. All that needs to happen is for the outgoing champions Liverpool to hand their hosts Manchester United a defeat. It will be payback for the Anfield team, who were eliminated by United 2-3 in the FA Cup in January.

Although it looks unlikely that Liverpool will not feature in the Champions League next season, but they may remain in the qualification mix if three points are delivered at Old Trafford, the ground of many fierce battles involving both illustrious clubs.

Earlier, Tottenham will push for victory against relegated Sheffield United, a result that will boost their European competition chances; while Arsenal use the first match of the day to prepare for a crucial fixture in the Europa League against Villarreal on Thursday.

Barcelona will remain at No 3 no matter the outcome of their trip to Valencia. But victory will reduce the gap by leaders Atlético Madrid to two points with four matches to wrap up the season.

Atalanta need just a point at Sassuolo to regain second spot from AC Milan. If they fail, Napoli and current champions Juventus will ride above them through positive results.