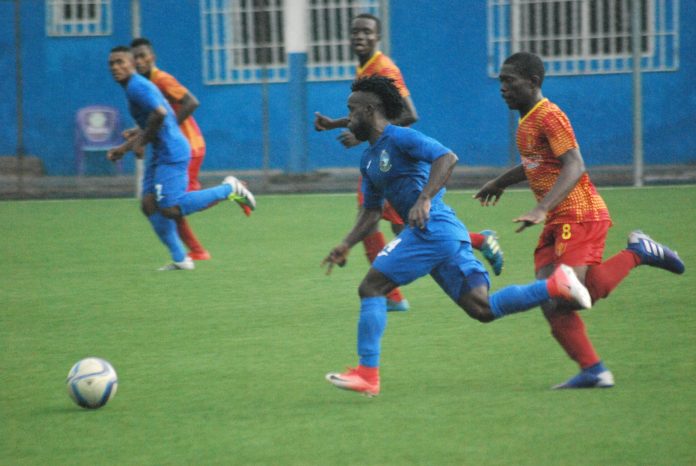 Enyimba will meet Sudanese side, Al Hilal in the first round of the CAF Champions League after both teams emerged victorious over their adversaries in the return legs of the lucrative club competition played in Aba and Omdurman respectively on Sunday night.

A first-half goal and four more in the second were all it took for the People’s Elephant to overturn a first-leg loss and advance to the first round of the CAF Champions League with a 5-0 win against Rahimo FC at the Enyimba Stadium, Aba.

Having lost 0-1 in the first leg in Ougadougou a fortnight ago, the People’s Elephant required a two-goal margin win but got much more as Reuben Bala and Stanley Dimgba’s braces added to Stanley Okorom’s first-ever Enyimba goal to give the two times champions a commanding 5-1 aggregate win.

The visitors started on an unimaginably wrong foot as striker Issouf Zanon was given the marching order after just ten minutes when he plunged his studs into Emmanuel Ampiah’s hips.

Enyimba capitalised and completely bossed proceedings with the exciting Chukwuka Onuwa at the root of most moves.

The hosts appeared to have found their opener when Dimgba’s gorgeous curler from the right went into the top corner, but the flag was up to rule out for offside.

Enyimba’s dominance eventually paid off after the half-hour as Reuben Bala cleverly slotted a low freekick beyond the goalkeeper into the far right in the 32nd minute to give Usman Abd’Allah’s men the lead going into the break.

Okorom was brought on at the restart for Ampiah who was still struggling from the impact of Zanon’s early challenge, and it took the substitute only ninety seconds to double Enyimba’s lead as he fired into the top left corner with an effort from outside the box.

The scoreline would be enough to send Enyimba to the next round but three goals came inside the last ten minutes to add gloss to the win.

Stanley Dimgba capitalised on a poor clearance to slot into the far right for Enyimba’s third, before Bala bagged his brace with another freekick.

Dimgba wrapped up scoring on the dot of regulation time with a simple tap in following Okorom’s cross from the right.

Enyimba will face Sudanese side Al Hilal in the next round with the first leg holding in Aba on September 15 while the important return leg holds in Omdurman two weeks later.

Meanwhile in Omdurman, Al Hilal fended off the spirited Rayon Sports of Rwanda on the away goal rule. The tie was evenly matched from the outcome of the first leg played in Kigali which ended in a 1-1 draw.

Hilal who would have thought who have an easy ride over their opponents were surprisingly held to a goalless draw in front of their vociferous crowd and they barely qualified for the first round by the virtue of their first leg result.