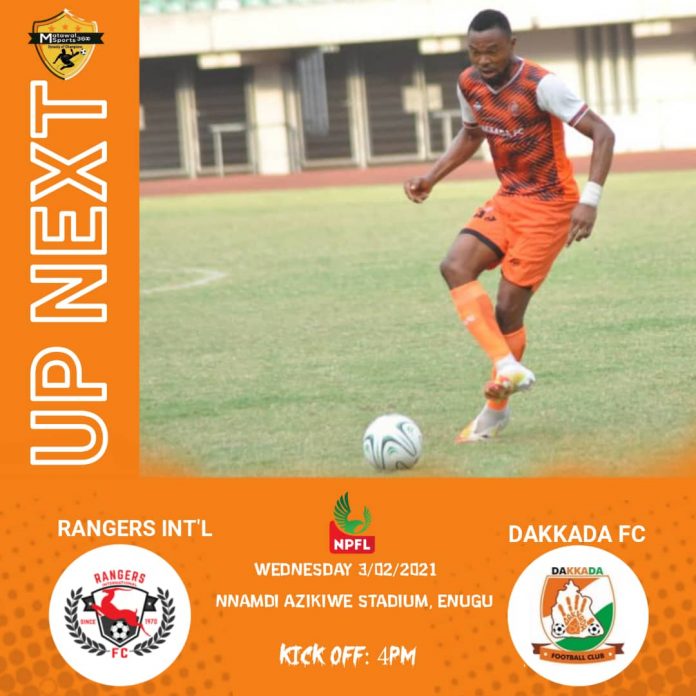 The second midweek instalment of this season’s NPFL beckons on Wednesday and Thursday with several mouth-watering fixtures on offer in the Matchday 8.

In the coal city of Enugu, Rangers and Dakkada will be locked in a Cream-Versus-Dream battle.

Rangers are on a miserable run of three matches without a win which makes their last win – a 2-1 home victory over FCIU on Day Four – seem a distant recollection.

This rekindles dreadful memories among Rangers’ faithful of one of last season’s dark patches which saw the Flying Antelopes go all of seven NPFL matches without a win between November 17, 2019 and January 5, 2020. A 0-2 home loss to Dakkada on November 24, 2019 was one of the sad occurrences in a litany of tragedies which befell Rangers during that sad spell.

Rangers’ woes were compounded after they fell short in a 3-1 away loss at Sunshine Stars last Sunday despite Head Coach, Salisu Yusuf making four changes to his start list with the inclusions of Tope Olusesi, Chinonso Eziekwe, Chimaka Madu and Godspower Aniefiok who scored the away side’s solitary goal on his first start of the season.

Yusuf will not only be without the services of the ever-present left full-back Ifeanyi Nweke who was shown a straight red in the closing stages of proceedings in Akure, last week, but will also have to take a decision on the continued start of last season’s top scorer Israel Abia who, despite having scored twice against Dakkada last year, has fired blanks in his last two successive starts and third overall.

Dakkada, on the other hand, ended their own winless run of three matches with a 2-0 home win over Warri Wolves last Sunday after Chief Coach Lawrence Kingsley made wholesale changes to his match day squad and the new entrants gave a good account of themselves thereby giving the veteran coach a welcome selection headache.

Dakkada’s captain and el comandante Aniekan Ekpe has been in commanding form recently and that run of form has seen him find the back of the net on three occasions already this term. His wealth of experience, degree of inspiration and in-depth knowledge of the beautiful game will once again be expected to make the difference when he and his colleagues file out at The Cathedral, on Wednesday.

Rangers went on a shopping expedition to Dakkada at the back end of last season and successfully priced away three of the club’s prodigies – striker Ojukwu Ifegwu, midfielder Eso Archibong as well as one of the club’s legendary and iconic players, Oluwafemi Ajayi.

Up until now, Femi Ajayi, who has yet to start a match for Rangers this season, is still considered one of Dakkada’s proudest ambassadors not only because he concluded his final few seasons at the club as highest goal scorer but also because of the unparalleled levels of commitment, loyalty and sacrifice he brought to bear during his time with The Chosen Ones.

Rangers and Dakkada took three points off each other in their respective away matches last season with three of the seven goals in the head-to-head reckoning between the two scored by Ajayi which makes the bulky striker all the more pivotal to the midweek’s contest.

Although as professional footballers it is expected of them to abandon all forms of old acquaintances during a football match but there certainly will be a sense of get-together and mixed emotions when the two sets of players share the same playing turf on Wednesday.