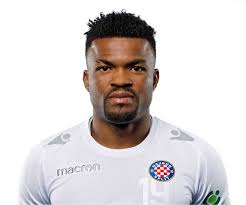 Samuel Emem Eduok has urged his Hajduk Split teammates to go all out and finish the season in grand style with a Europa League ticket with only two matches to the end of the Croatian League.

Eduok played a starring role as his Croatian club defeated runaway league champions, Dinamo Zagreb 3-2 away last weekend to bolster their quest for a place in Europe which could have become dimmed had they lost.

Hajduk Split will play Rijeka who are currently fourth on the league table with 58 points from 34 games and are in the final space for a continental slot, on Sunday at home before travelling to already relegate Inter Zapresic on July 25 in the deciding fixture of the season.

Eduok in an interview with dasportainment247.com pointed out that they had to play their hearts out to ensure that they got the three points against league champions, Dinamo Zagreb last weekend to keep their hope of a place in Europe alive and down to the wire.

“It was a good win for us last weekend because we were stretched to the limit against Dinamo Zagreb,” Eduok said from his base.

“We were united and knew what we wanted even though we knew it won’t be easy to get a win there. A loss would have meant falling back by four points to Rijeka and it would have been a tough task.

“We just have to be fully focused to get a win against Rijeka and in our final game of the season. It will be fine to play in Europe and we can’t wait for it.”

Eduok has featured in 28 games for Hajduk Split with 10 goals to his credit and four assists. He has been booked six times and has helped the club to the fifth spot on the table with 57 points from 34 games.

They are only a point below their Rijeka (who they face on Sunday) and they will leapfrog the club if they are able to secure the maximum points and hold their nerves too against Inter Zapresic next weekend.