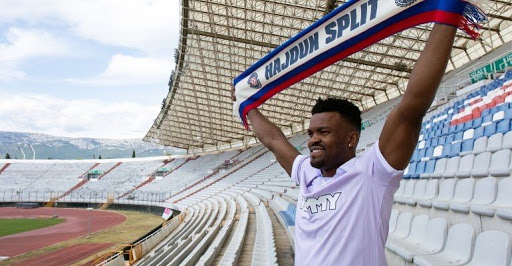 Hajduk Split of Croatia striker, Samuel Emem Eduok has tasked the handlers of the league to improve the welfare package of the players plying their trade in the Nigeria Professional Football League to reduce the influx of the country’s best legs to obscure leagues abroad.

Eduok played for then Dolphins (now renamed Rivers United) and was sensational for the Pride of Rivers from where he moved to Tunisia and thereafter Turkey before he recent switch to the Croatian league.

The 26-year-old noted that it would be difficult to stop any player from realising his dream to play abroad irrespective of which part of the world it is unless the league organisers make the league more attractive and also ensure there are modalities in place to sanction clubs that do not honour the contractual agreement they have with their players.

“I think the players are moving to obscure leagues because of better welfare package,” Eduok said in an interview monitored by www.dasportstainment247.com on popular WhatsApp platform, Nigerian Sports Mouthpiece (NSM).

“If a player has an opportunity to go overseas(irrespective of where he chose to go) it is better because he will earn lots of money.”

The ex-Kasimpasa striker however thumbed up the remarkable progress made by the Nigeria Professional Football League in the recent seasons where winning away games have become norm than it was before.

He hinted the improvement noticed have rubbed off positively on the NPFL.

“The NPFL is better now because every weekend so many teams are getting positive results away. I think there is a lot of improvement.”

Eduok is in his first season with Croatian giants Hajduk Split with whom he has played 22 games in the current season with nine goals.