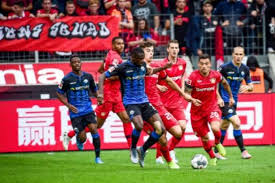 After seeing off Taiwo Awoniyi’s Union Berlin in the second round of the DFB Cup, Paderborn with Super Eagles defender, Jamilu Collins face a difficult task tonight to scale through to the quarter final of the competition with an away tie against Borussia Dortmund.

Not many tipped Paderborn to qualify when they were drawn to meet Bundesliga side, Union Berlin also in an away fixture in the second round but Collins and his team shattered bookmakers’ predictions with a 3-2 victory.

Paderborn have been erratic in the 2nd Bundesliga with 26 points from 19 matches to be placed ninth but they have been impressive in the DFB Cup where they defeated SC Wiedenbrueck 5-0 in the first round before they eliminated Union Berlin in the second round.

They will fancy their remote chances against Dortmund who have flattered to deceive in a season they were tipped to give Bayern Munich a good run for their money. They are presently sixth on the table with 32 points from 19 games and are overly reliant on Erling Braut Haaland.

Collins who has seemingly lost his Super Eagles left back jersey to Zaidu Sanusi has not been having a smooth season in the 2nd Bundesliga with the English with Nigeria heritage, Chima Okoroji breathing down his neck at Paderborn this season for the left back spot too.

Notwithstanding the competition from his teammate, Collins has featured 11 times in the 2nd Bundesliga which is the same number of matches Okoroji has played in the league but he however, added two more appearances in the DFB Cup.

Edin Terzic led Dortmund will fancy their chances of going all the way to win the cup competition with reigning champions and favourites, Bayern Munich already eliminated in the second round by Holstein Kiel.