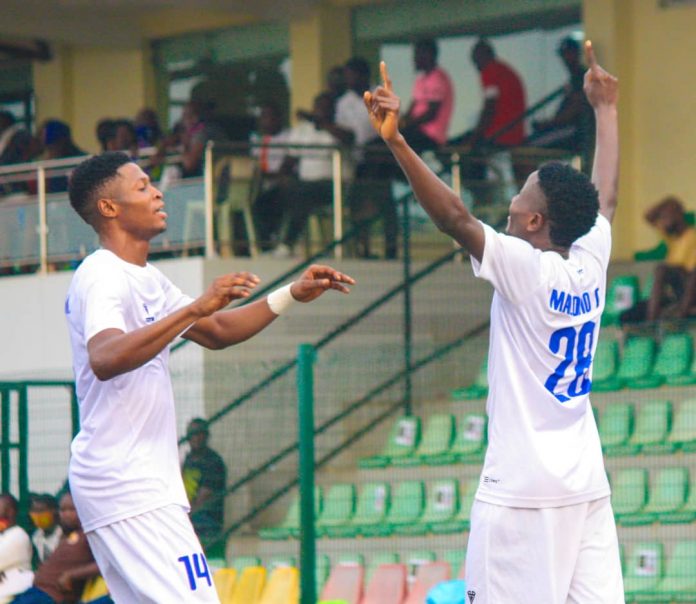 Shooting Stars Sports Club (3SC) of Ibadan, overcame the challenge of a bad playing surface to beat hard fighting Delta Force of Asaba by a lone goal, to maintain their hundred percent record.

Muhammed Akilu, got the only goal of the energy sapping encounter, slashing in Muritala Taye’s pull out, four minute to the end of the first half, to give the Ibadan soccer lords their seventh straight win of the season.

The Oluyole Warriors fought like trojan to squeeze out the win on a bumpy pitch of the Austin Jay Jay Okocha Stadium, Ogwashi-Uku.

It was a match in which the NNL Group B1 leaders put up great character, as they fought like true Warriors to wade off pressure from the home side, particularly in the second half.

Goalkeeper Charles Tambe kept his cool to keep a clean sheet in a very bad goal area while Abbey Benson, Elum Henry, Amodu Nurudeen, Muritala Taye, gave their all to defend their territory.

Isiaka Mutiu, Fatai Gbadamosi, Akilu Muhammed were on top of their game, just as Enuademu Chinedu, Opeoluwa Olufemi and Gafar Olafimihan played with tenacity in the match day seven contest.

The coach Edith Agoye tutored Shooting Stars never hide their intension to beat the homers as they created scoring chances but met a brickwall in the skipper Tosin Adegbite led defenceline of the host while goalkeeper Ani Ozoemena also made some spectacular saves to stop the stars.

In the 25th minutes, goalkeeper Charles Tambe pulled a superb save, stretching at full length to parry the ball over the bar, to deny the hosts a goal, while Gafar Olafimihan was unlucky as his 33rd minute shot hit the bar, with goalkeeper Ozoemena already beaten.

With Akilu Muhammed’ s lone strike separating the two sides in the first half, the second half was fiercely contested as the visitors tried all they could to grab the leveller but the visitors refused to succumb, thwarting all the efforts of the coach Sunday Okoh tutored Delta Force till the referee brought proceedings to an end.

Shooting Stars thus continue their historic feat, having played and won seven matches in a row, scoring a whooping 16 goals with just one conceded.

They comfortably sit atop Group BI with the maximum 21 points and an astonishing goal difference advantage of plus 15.

The Oluyole Warriors will next Wednesday, welcome FC Nilayo of Abeokuta to the Dipo Dina Stadium for a match day eight fixture.

WAFU-B U17 Championship: Golden Eaglets step up preparations with another friendly...