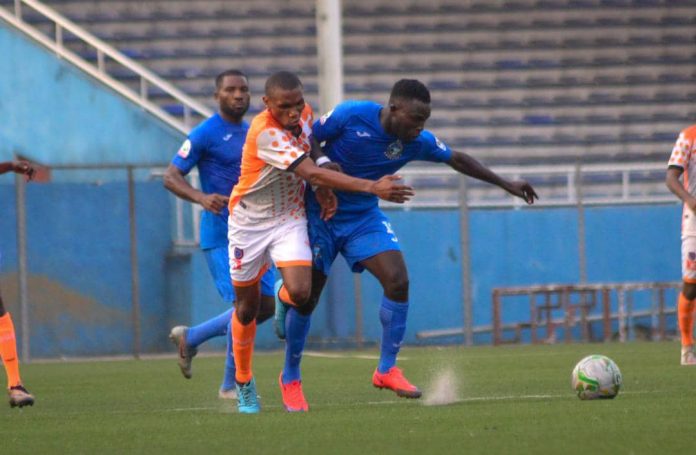 “I’m really grateful to God for all his love and mercies towards me in my career and for the special grace granted me to score my first career goal. It’s indeed a very special moment for me and I’m happy that the goal was just enough to earn my team a precious point and I want to dedicate this goal to God Almighty and to my dear wife Ukeme David Philip”

Those were the words of Akwa United’s defender David Philip after scoring a stoppage-time equalizer for his side against Enyimba International on Match-day 12 in Aba on Wednesday.

Philip joined the Promise Keepers from Go Round FC at the beginning of the 2019/2020 Nigeria Professional Football League season and played 16 out of the team’s 25 league games last season before the outbreak of coronavirus pandemic which truncated the league.

The former Rovers, Abia Comet and Go-Round FC defender has cemented his place as the first choice at left-back in Coach Kennedy Boboye’s team.

Philip who was sidelined at the beginning of the season due to injury was making his fourth start of the season in the match against Enyimba in which he scored his first goal for Akwa United, in his 20th appearance for his state team.

In an exclusive interview with the club’s official website www.akwaunitedfc.com Philip said;

“I’m really excited that I scored for my team at such a big stage. I don’t think I will ever forget that moment. Although I have been scoring goals during training sessions and in friendly games, the goal against Enyimba is special to me and the entire team because it came at the time we needed it most and it was good enough to get us a crucial point away from home.

“I will continue to appreciate God for what he has done for me as a professional footballer and I pray for the grace to score more goals from my position as a defender because football is all about scoring goals.

“I want to say a very big thank you to our Chairman Elder Paul Bassey for his love and dedication to the team. I wish to sincerely congratulate the coaching crew led by Coach Kennedy Boboye and all my teammates for their support. I also want to appreciate all our fans for their support, by the grace of God I will continue to do my best for Akwa United anytime I’m selected to represent the club”.

Philip says he is confident that he will score more goals for Akwa United this season after scoring his first in Aba and promised to give his best to ensure the team achieve her aim at the end of the season.