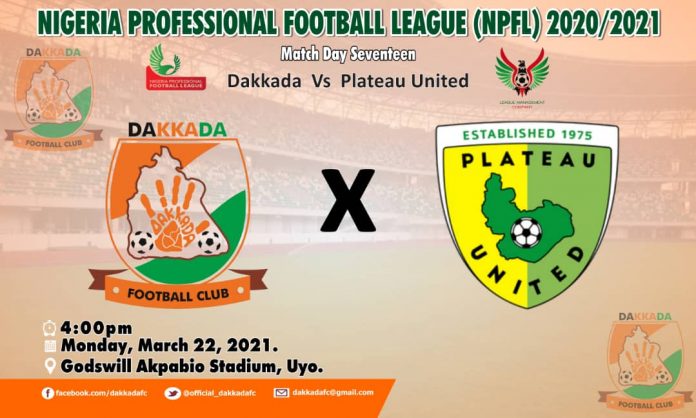 Fourteen of Dakkada’s seventeen NPFL goals so far have been scored at home, where they are riding an impressive record of at least a goal in every match and an average of almost two goals per match.

Dakkada tend to come to the party in these supposed big games especially at home and this must be a major source of concern for a poorly-travelled United who escaped defeat in Uyo last season by the collective skin of their teeth, no thanks to an infamous penalty miss by Eso Archibong.

Once again inspirational captain and el commandante, Aniekan Ekpe, who was given a much-needed rest last Thursday, in Lafia, will be available for selection and, if selected, he will be hoping to get straight back to scoring ways to add to his four-goal tally in the colours of Dakkada this term.

Ekpe was one of three alterations made by the vastly-experienced Head Coach Umar Danlami on Thursday with both Goalkeeper Thomas Omokhudu and midfielder Arinze Obuka returning to the start list for the first time since match day six.

With only three draws and five defeats in eight matches Plateau United possess some of the division’s poorest figures on their travels which include three successive defeats between February 3 and 20.

United have been boosted by the return of their legendary goal poacher, Ibrahim Mustapha, who has racked in four goals in as many appearances since his return from a long injury lay-off. Head Coach Abdul Maikaba rested a plethora of first team regulars, including Mustapha, last Wednesday, preparatory for tomorrow’s contest. The duo of Bernard Ovoke and Daniel Itodo who had not started a match in over six prior match days were drafted into the starting eleven alongside goalkeeper Dele Ajiboye, Abubakar Ibrahim and Uche Omwuasonaya.

There will be a reunion for Moses Effiong when he returns with Plateau United to face his former employers. Effiong featured from start to finish, at home and away, for Dakkada when they faced Plateau United last season and attracted the attention of Maikaba who fell head over heels for him and eventually worked out a transfer for the former Calabar Rovers captain.

There will also be a sense of get-together for Gabriel Wassa, Dennis Nya and Coach Abdul Maikaba who enjoyed successful spells in Uyo with Dakkada’s neighbours, Akwa United in the yesteryear.

All that camaraderie and old acquaintances will be brushed aside when business commences in Uyo today.

KEY STATS
• Dakkada’s tally of 17 so far has been 3 headed, 12 right-footed and 2 left-footed goals.

• Plateau United’s 20 goals have been scored by 10 players with Mohammed Zulkifilu the leading scorer with 6.

NEXT FIVE FIXTURES
Enyimba Vs Dakkada
Plateau United Vs Rangers