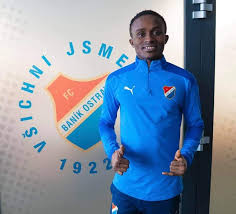 New Banik Ostrava acquisition, Collins Yira Sor has made an impactful start to life in the Czech Republic topflight after he had an assist on his debut in their narrow 3-2 loss to Pardubice on Saturday.

Sor, a former Flying Eagles star was handed his debut barely 12 days after he inked a three-year deal at the club in the 54th minute as a replacement for David Buchta, and 12 minutes after his introduction, the Nigerian pierced through the defence of their host In the 76th minute and his pass from the right-wing was slotted into the net by Daniel Tetour for Banik Ostrava’s first goal.

It was Jan Jerabek that got the curtain-raiser for the home team in the 41st minute before Filip Cihak doubled the advantage in the 74th minute. Banik Ostrava threatened a comeback through Tetour’s goal from Sor’s assist in the 76th minute but David Huf’s third goal for Pardubice in the 87th minute protected the hosts’ two-goal cushion.

Patrizio Stronati did pull another goal back for the visitors in the 90th minute but it was too little, too late as Pardubice ran away 3-2 winners in the Matchday 20 of the Czech Republic topflight league.

Speaking on the exploit of his ex-player, Sor, the President of 36 Lion Hajj Gafar Liameed thumbed up the performance of Sor on his first game for Banik Ostrava with the following words: “Collins Yira SOR made the same move Vs Osun United on 17 November 2020 and got two assists on a Nigerian like pitch with series of all around challenges.

“Today; 20th February 2021; 12 days after he penned down a 3-year contract with Banik Ostrava in Czech Republic; a heaven like situation with little or no challenge; Collins Yira SOR got his debut; made the same move and got an assist.

“This young man gets behind any defender anywhere in the world, he and 10 others will soon get Nigeria to an enviable stage in football.

“A Lion is roaring in the Czech Republic. Take note.”

Banik Ostrava are in the eighth position on the table with 29 points from 20 matches and they will face Teplice in their next league tie on Saturday next week.