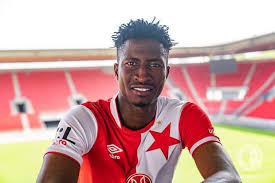 Peter Olayinka’s Slavia Prague will clash with Sparta Prague tonight in the semi-final of the Czech Republic Cup barely four days after the Red and Whites won their third consecutive Fortuna Liga title.

Slavia Prague has had an impressive season including reaching the quarter-final of the Europa League after beating Rangers and Leicester City along the way. They also retained the league title with four games to the end of the season despite spirited efforts from Jablonec and Sparta Prague who are currently second and third respectively.

The Red and Whites have another opportunity to add gloss to their amazing season if they go past neighbours, Sparta Prague today in the semi-final as they seek the league and cup double.

Nigerian import, Peter Olayinka has played a pivotal role in Slavia Prague’s remarkable season and has played 35 games, scored 11 goals and with five assists from all competitions.