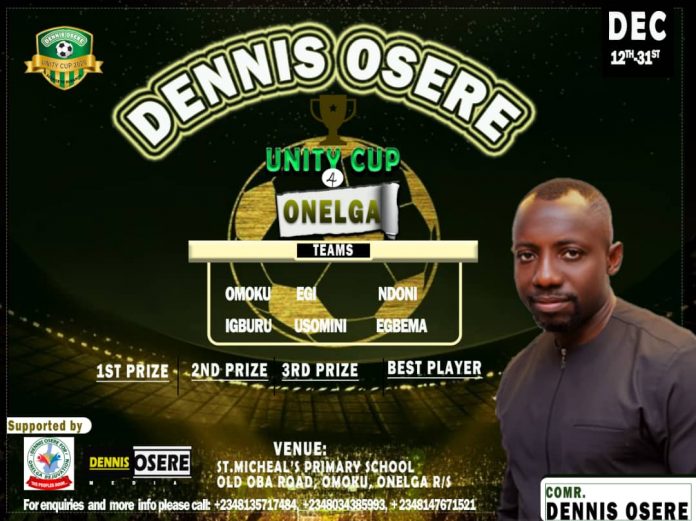 Owing to his unflinching love and his philanthropic gesture, Comrade Dennis Osere has decided to sponsor a tournament with the aim of uniting the youths and good people of Onelga Local Government Area of Rivers State through football.

The organisers informed www.dasportstainment247.com that everything is set for the start of the tournament with the sole sponsor of the tourney, Comrade Dennis Osere providing all the necessary logistics to make for a great tournament that willl suffer no hitches at all.

There will also be nurses, doctors, and masseurs to take care of all health and emergency issues while first aid boxes have also been provided at various designated places to ensure that there is no casualty of any kind.

The Chief Executive Officer of Denco Osere Company Limited has also provided buses that will be taking the teams to the venue of their games to ensure that no team is walked over and that everything works out seamlessly.

The sponsor of the tournament, Dennis Osere said it is always his delight to make the youths happy to dissuade them from restiveness and he emphasised that having the ability to gather the youths of Onelga LGA makes his heart glad.

He said there are plans to make consultation with foreign scouts to ensure that the talents discovered during the tournament are put to good use.