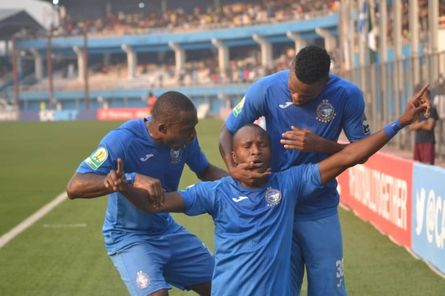 Enyimba and Rivers United are through to the next round of the CAF Champions League and CAF Confederation Cup competitions respectively after a hard fought battle with Rahimo of Burkina Faso and Futuro Kings of Equatorial Guinea on Sunday in the return leg of the preliminary round.

At the Enyimba International Stadium, Aba, Enyimba drew 1-1 with Rahimo FC of Burkina Faso but progressed to the first round of the CAF Champions League 2-1 on aggregate having won the first leg 1-0 in Ouagadougou on November 29th.

It was a repeat of the same fixture last year at the same stage but the outcome was quite different. Enyimba ran away 5-0 winners then after a 1-0 loss in Ouagadougou but this term Rahimo proved to be up to the task.

After a goalless first half, Enyimba Skipper, Austin Oladapo scored the curtain-raiser off a freekick in the 60th minute but Rahimo were not cowed by the goal and got their equaliser a few minutes later to make it a tensed finish in Aba.

In the CAF Confederation Cup, Rivers United also cruised to the first round 2-0 on penalties against Futuro Kings after a 3-3 aggregate scores at the end of 180 minutes of action.

Rivers United started the game impressively and were a goal up inside 12 minutes through Godwin Aguda. They scored the second goal before the end of the first half through Kehinde Adedipe in the 39th minute.

The Peace Boys couldn’t build on their fine first half display. They allowed the Equato-Guinean to claw their way back through Pape Sibo Ware’s pile-driver in the 52nd minute.

Futuro Kings could not convert any of their four penalty kicks while Bakary Bamba and Ebenezer Odunlami converted two of Rivers United four and it was enough to take the Nigerian club to the next round.