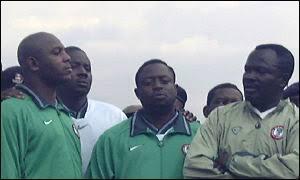 President Muhammadu Buhari is saddened to learn of the passing of former Nigeria senior team goalkeeper and one-time assistant coach of the Super Eagles, Joe Erico.

Commiserating with the family of the legendary player and tactician, as well as the Nigeria Football Federation (NFF), the President avers that the nation will forever remember him for his tireless devotion to duty, ensuring victory for Nigeria when it mattered most in football.

President Buhari believes that Coach Erico’s guidance as a veteran would have availed much for the Nigerian football community, but it pleased his Maker to call him home at such a time.

The President prays almighty God to grant the soul of the deceased eternal rest and divine comfort for family, friends, associates, and everyone who came in contact with the talented sportsman.

Minister Mourns Erico
The death of Former Green Eagles goalkeeper Joseph Erico has been discribed as a monumental loss to Nigeria by Minister of Youth and sports Development, Sunday Dare.

A statement by the Minister’s Media Office stated

“Erico dead? this is so unfortunate and sad. This is one death too many, a great loss to the entire family and the sporting fraternity. He was a great goalkeeper who stood out among his peers, he also made his mark as Assistant Super Eagles coach,” Dare was quoted in a press release made available to www.dasportstainment247.com.

“My deepest condolences to the family, friends and the football family. May God bless his soul and comfort his family.” the statement concluded.

Erico made his mark as a player with ECN which metamorphosed into NEPA Football Club. He was a member of the Green Eagles Nations Cup Bronze winning team in Ethiopia in 1978. He later coached Julius Berger Football Club of Lagos as well as NEPA FC. He was Assistant to the late Amodu Shuaibu at the Mali 2002 Nations Cup. He alongside the late Amodu and Stephen Keshi qualified the Super Eagles for the 2002 World Cup, but were sacked afterwards.

Erico was nicknamed the Jogo Bonito exponent because of his flair for tip tap football reminiscent of the Brazilian Samba style.
He was aged 71.

Born Joseph Bassey Erico in the Odukpani local government area in what is today known as Cross River State, Erico belonged to the cast of the very best goalkeepers in the history of Nigeria’s senior team, and served at the same period as the revered Emmanuel Okala and Eyo Essien.

He made his debut for then Green Eagles in an Africa Cup of Nations qualifying match against Zambia in Lagos in July 1973 (which Nigeria won 3-2), and then kept goal in all of Nigeria’s six matches at the 1976 Africa Cup of Nations in Ethiopia, where the Eagles finished third – the first time Nigeria would win a medal at the AFCON. Erico was also in goal in all of Nigeria’s pre-tournament friendlies against Kenya, Zambia and Tanzania just before the team flew to Ethiopia.

“It is another sad day for Nigerian Football. Erico was among the very best of Nigeria’s international goalkeepers and also served the country with fervour and diligence as Assistant Coach of the Super Eagles between 2001 and 2002. He will be sorely missed. We pray that Almighty God grant him eternal rest and also grant his family and loved ones the fortitude to bear the big loss,” NFF General Secretary, Dr Mohammed Sanusi, said in Abuja.

Nicknamed ‘Jogo Bonito’(Beautiful Game) for his preference for fluency and expression in the rhythm of play of his teams as a coach, Erico was part of the triumvirate (alongside late Amodu Shaibu and late Stephen Keshi) who were shooed in to do a rescue job for Nigeria as the ship to the 2002 FIFA World Cup finals tottered badly under Dutchman Johannes Bonfrere. With three matches left in the campaign and a must-win mandate for all, the trio got the job done and qualified Nigeria for Korea/Japan.

They also led the team to a bronze-medal finish at the 2002 Africa Cup of Nations finals in Mali early 2002.

With his death on Thursday morning, it means all members of that historic triumvirate have now passed on.