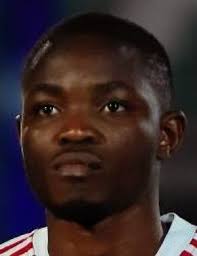 Genk new acquisition, Victory Beniangba is continuing his integration at the Belgian club after he started training with the club’s main team from Thursday.

The former Bayelsa United and El Geish (Egypt) player travelled to Belgium the penultimate Friday to firm up his five years deal with KRC Genk from Egyptian side, Ceramica Cleopatra as brokered by his agent, Gbenga Agbejoye who is part of the England based agency, Mercury Sports Limited.

The Nigerian initially began training with the second team of Genk after he passed his routine medicals and special conditioning to put him up to speed and also gauge his fitness level.

But after he was able to prove beyond reasonable doubt that he was ready for life in Belgium, Beniangba was promoted to the senior team and has been training with the team.

The 19-year-old has been assigned jersey number 79 ahead of his unveiling that has now been slated for Monday, September 26th.

Beniangba was on loan at El Geish last season played 18 times for the Egyptian side that finished fourth scoring crucial six goals from just 10 starts.