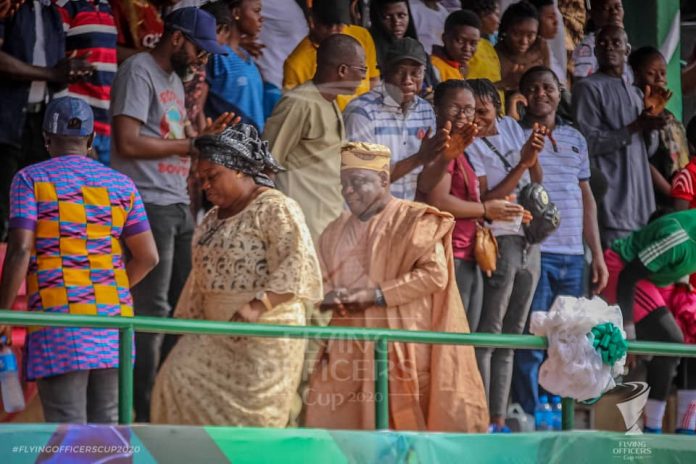 The final of the 2020 Flying Officers Cup was graced by the parents of the late Flying Officer, Tolulope Arotile, who was Nigeria first ever female combat helicopter pilot.

Mr and Mrs Akintunde Arotile who were special guest of honour at the final of the Flying Officers Cup, a competition set up in honour and memory of their daughter who was regarded as a great patriot during her time.

Some of the top football administrators in the country were also in attendance as the final of the biggest women football Preseason Championship in Africa took center stage in Abuja on Sunday evening.

In her remarks, the Chairperson of the NWFL, Aisha Falode was impressed with the organisation of the event and openly praised them for doing a great job.

Mr Akintunde Arotile, Father of the deceased Flying Officer, who was emotional and also grateful to Ratels Sports Foundation for honouring his daughter, described her as a special, talented and brave child. Mr Arotile went on to say his daughter was a very religious person and loved to cater for the welfare of the less privileged girl child.

Ratels Sports Foundation President, Barrister Paul Edeh while speaking thanked all the dignitaries that graced the final of the 2020 Edition of the Flying Officers Cup and promised to make the event even bigger next year.

Bayelsa Queens were crowned Champions after defeating Nasarawa Amazons 1-0 in the final on Sunday evening at the Guards Brigade Stadium, Aguiyi Ironsi Cantonment, Abuja while Edo Queens finished as third.