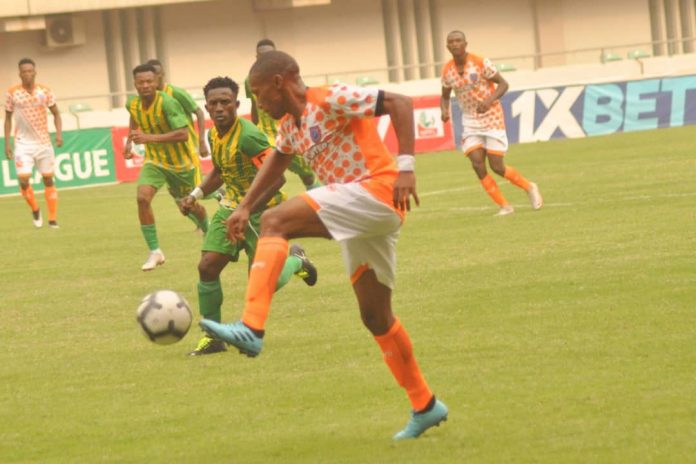 With four victories and two draws in their opening six home matches, sixth placed Akwa United will once again be brimming with confidence as they aim for their fifth win at the Nest of Champions this term when they take on neighbours Rivers United on Sunday afternoon in one of NPFL Match-day 13 fixtures.

Last time out, the Promise Keepers picked a valuable point in their 1-1 draw with Enyimba International on Match-day 12 in Aba, to move up to 19 points from 12 matches comprising five wins, four draws and three loses.

Head Coach of Akwa United Kennedy Boboye has revealed that the game is a must-win for his team, and stressed that they will not leave any stone unturned when the two teams meet on Sunday.

“We are taking it one game at a time and at the moment, our concentration and focus is on the match against Rivers United on Sunday. We are happy with the level of our progress since the start of the season, we endured a very difficult start but now things are beginning to normalise and we want to build on that.

“My players have put up brave and convincing performances in our recent matches and I congratulate them for that. They are fully aware of the importance of every match and they have a point to prove individually and as a team because we have put all previous results behind us and our focus is on getting all three points on Sunday.

“We want to score more goals and keep winning our matches. Our home form has been very impressive and we are determined to make our home a fortress, meaning we have to give 100% in every match. We won’t leave anything to chance on Sunday because the match against Rivers United is a must-win and a positive result will motivate us to keep fighting for points.

“The 2020/2021 NPFL season is a full marathon season, and we have played 12 matches already with 26 still remaining, so we really need to go for a kill in all our matches. Although we are not yet at the level or position that we want to be, the truth is that we are working hard to ensure we build a formidable team that will take us through the course of the season,” Boboye assured.

One point and one place separate Akwa United from Rivers United on the log, the Port Harcourt outfit are 7th on the log with 18 points from ten games albeit with two games in hand.

Last season, Sampson Gbadebo’s stoppage time goal sealed maximum points for the Promise Keepers in Uyo and coach Boboye’s men are in superb form and will be hoping to continue their fine home run against the Pride of Rivers who have lost all five of their previous away games in all competitions.

With seven goals in 12 games, reliable striker Ndifreke Effiong is likely to shoulder his team’s goal scoring responsibility once again along side strike partners Mfon Udoh and Charles Atshimene who have scored two goals each. Coach Boboye’s men have scored eight of their 13 goals at the Nest of Champions.

Goalkeeper Adewale Adeyinka has kept four clean sheets in seven matches and has not conceded in all three home games he has played. The goalkeeper has enjoyed the best of cover from his back-line marshalled by Sampson Gbadebo, Olisa Ndah and others.

Youngster Godswill Nicholas who impressed everyone on his full NPFL debut in mid-week against Enyimba in Aba is likely to retain his place in the team.

The crucial game is scheduled to kick off at exactly 4pm behind closed doors and will be played with strict adherence to all Covid-19 guidelines.

WAFU B U17 FINAL: Kanu Charges Golden Eaglets to give everything...