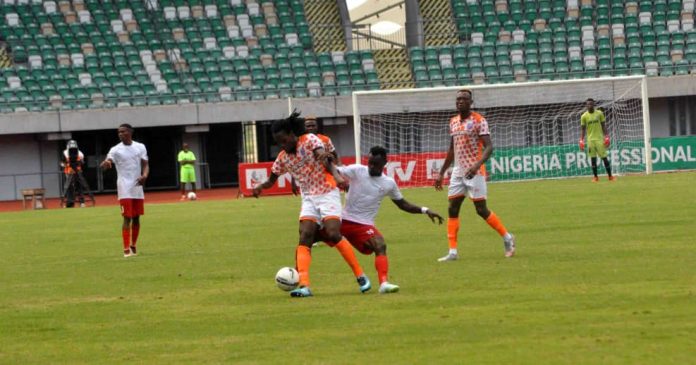 Akwa United were held to a goalless draw by Rangers International FC on Monday evening at the Godswill Akpabio Stadium, Uyo but the solitary point was enough to restore the Promise Keepers back to the top of the NPFL table with 41 points from 22 games.

Kano Pillars leapfrogged the Promise Keepers temporarily on Sunday after they battled to a score draw against Katsina United at the Muhammadu Dikko Stadium, Katsina to move to 41 points but their lead only lasted 24 hours after the Uyo side managed to pick a point at home to determined Flying Antelopes on Monday evening. Sai Masu Gida fell back to the second spot on inferior goals difference even though they are on the same 41 points with Akwa United.

It was a tough and highly temperamental game that recorded eight yellow cards and a red card to second half substitute, Issif Traore of Rangers who got sent off after a professional foul on goalbound Akwa United attacker in the 93rd minute but the away team held on to record a positive result and staged a comeback from their surprise 1-0 loss at home to Rivers United last weekend in Enugu.

The Flying Antelopes on their part move to 34 points from 21 games. They still have an away game in Aba against Enyimba that is yet to be played.

Akwa United head to Okigwe for a date with Abia Warriors in another league tie on Thursday while Rangers International FC will host Jigawa Golden Stars as they seek first win in three games also on Thursday.