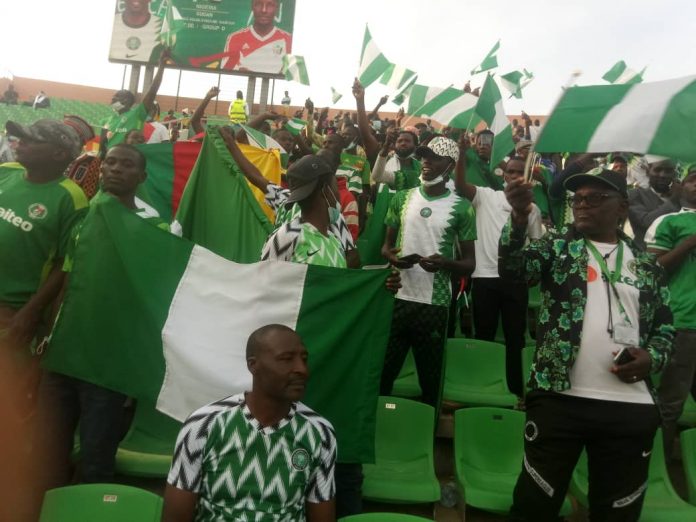 It was all smiles in the city of Garoua, Cameroon as the Super Eagles of Nigeria secured qualification to the knockout stages of the African Cup of Nations amidst Super Eagles Supporters Club side attraction member Iyabo Afolabi winning Fan of the match.

President of the Super Eagles Supporters Club, Prince Vincent Okumagba, immediately after the match celebrated the Super Eagles for maintaining a perfect start to the tournament by making it two wins out of two even as he hailed the Interim Coach Augustine Eguavoen for wonderful job he as done so far within a short time.

“The Super Eagles of Nigeria have once again given us something to cheer by securing qualification into the Round of 16 of the African Cup of Nations.

They did is a fashionable way which has ensured we are on top of the group and if we avoid defeat in our last game, we will finish top.

I also want to use this opportunity to praise the Interim Coach Augustine Eguavoen, for the good work he has done so far since he took over, the Eagles are playing well and giving us beautiful football, we will continue to support him as we hope to conquer Africa”

Also to my member in whom I’m well pleased, Iyabo Afolabi for winning Fan of the match, she has been consistent all along supporting our National teams, I’m not surprised by the award”.

Two first half goal from Samuel Chukwueze and Taiwo Awoniyi put the Eagles to a comfortable lead.

Nantes of France forward, Mose Simon made it 3 returning from the break.

A consolation goal for Walieldin Khedr from the spot was not enough as the Super Eagles made it through to the round of 16.

Prince Okumagba urged the Super Eagles to remain focus even as he assured them of more support ahead of their next match.

The Super Eagles will now set their eyes on their last game against Guinea Bissau on Wednesday, 19th January 2022.