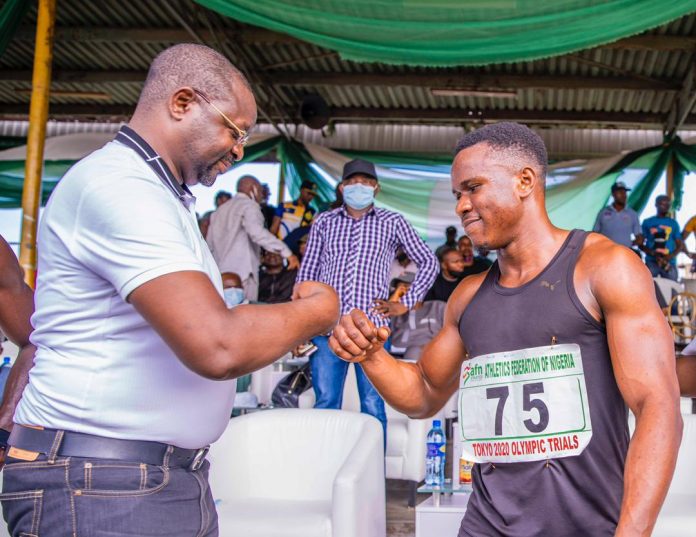 Enoch Adegoke who is making a statement with spectacular performances ahead of the Tokyo Olympics has showered encomium on the Sports Minister Sunday Dare for adopting him through the Adopt A Talent Initiative.

According to Adegoke:
“it has been really awesome for me knowing fully well that immediately after the Honourable Minister adopted me, that was the tonic I needed to give out my best in the track and field event.

“As you can see, I just emerged winner in the race here in Lagos and ecall that we went to the United States for Preparations the Olympics, everything has been working perfectly well and you know we needed money for the camping and the Minister made it available for me by adopting me.

“This means all I needed for the training, food, coaches and the rest were taken care of by the Minister.”

“I appreciate him for giving me the opportunity to be at my best. He adopted me with 10,000 US Dollars. Aside myself, the Minister has been supportive to the Athletes generally and he is a motivator to everyone. He visited us in the United states and he’s also here at the National Open trials.

“This shows his passion and interest and the fact that he cares about our success. All we can do is reciprocate his gesture with a podium performance in Tokyo.” Adegoke concluded.