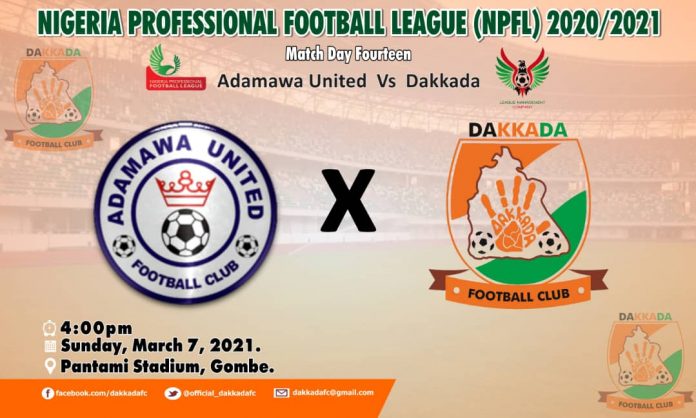 Adamawa United and Dakkada – two sides who got promoted to the elite division in the same year – will renew old acquaintances in an NPFL match day fourteen fixture this Sunday.

The match which is the third-ever meeting between the two sides will take place at the pantami township stadium in Gombe.

Dakkada were crowned 2018/2019 NNL champions after their 2-0 win over Adamawa United in the final of an enthralling end-of-season Super-4 tournament in Enugu in 2019 before buttressing their dominance over United with a 4-1 NPFL home win last season.

Adamawa United began this season like they did the last with a catastrophic run of mortifying results leaving them anchoring the NPFL standings. But that fumbling and wobbling seem, today, a distant memory as they now appear to have found some surefootedness as regards their recent performances.

United are experiencing a contrasting but positive turnaround to their NPFL fortunes and can now only be underrated at anyone’s peril.

After suffering five prior successive losses, Adamawa United are now on a streak of two matches without defeat for the first time since their NPFL debut on November 3, 2019.

This recent resurgence has seen them suffer just one defeat in their last four outings and have amassed more points in their last two matches than they previously did altogether since March 1, 2020.

Adamawa United’s major change in their memorable last two matches has been the introduction of goalkeeper Friday Achimugu in place of Victor Philemon. Achimugu has gone on to keep two clean sheets in succession and seems to have a good command of the defense line in front of him which comprises Akwa Ibom-born Uwem Charles who is in captivating form.

Dakkada have carved a recent niche for themselves as the comeback kings of the NPFL with two consecutive jaw-dropping comeback home wins over Kano Pillars and Wikki Tourists shooting them up to seventh place.

Goals have been there aplenty for Dakkada as they seem to have perfected the act of goalscoring with a sense of naturalness but their Achilles heel has been an incessant concession of goals. Although The Chosen Ones have scored in all but one of their last five outings but they have also conceded at least a goal in each of those matches which has negatively rubbed off on their goal difference.

The last time Dakkada kept a clean sheet was seven match days ago and Chief Coach Lawrence Kingsley who has recently spoken out against the ugly trend will know that the first major piece of tactic towards victory, tomorrow, will be to try and keep a clean sheet against Adamawa United who are the NPFL’s least scorers with only four goals to their name all season long.

That tactic will need to be juxtaposed with a no-holds-barred offensive approach aimed at breaching a United defense which has not conceded a goal in their last two matches.

KEY STATS
• All the goal scorers from both sides on the two previous fixtures between Dakkada and Adamawa United are no longer with the clubs except United’s Nanushi who scored an own goal in Enugu two years ago.

• This is the first time Adamawa United will go two matches without defeat since they got promoted to the NPFL in 2019.

• Dakkada have scored more goals (9) in the second half of games than in the first (7). They have also conceded more second-half goals (10) than first (8).