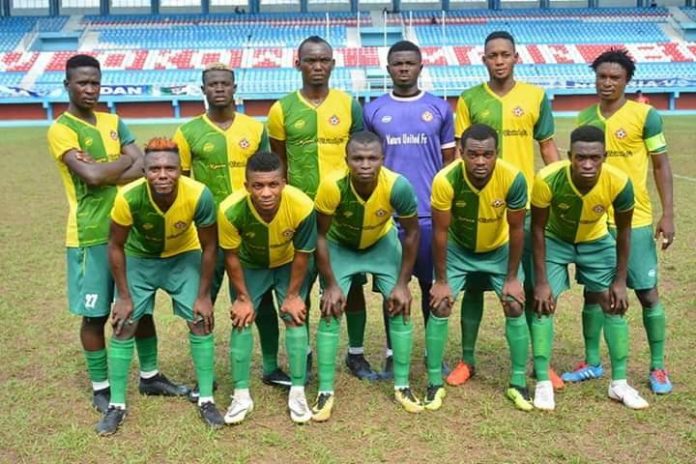 Say what you like about Coach Abdullahi Biffo, but you can never accuse him of lacking ambition and this he has continued to prove at all the clubs he has led with his imprint left to judge the good work he did.

The Katsina United gaffer has taken up another role with Kwara United and it is with the primary aim of revamping the Harmony Warriors and ensuring that they are among the top clubs in the Nigerian league again.

“What we are looking at now is how to make good use of the opportunity we have now to ensure that Kwara United rank among the top teams in Nigeria again,” says Biffo in a chat with Dasportstainment247.com.

“Considering the task ahead we had to work hard to select dedicated players who are able to do the job the way we want it.”

Kwara United, under Abubakar Bala, dropped to the second tier, the Nigeria National League (NNL) last season and Biffo who previously worked at the club, as an assistant coach came back to help his hometown club secure promotion before the lifeline they were presented with through the slot they bought from Delta Force.

Kwara United started the NNL campaign on a bright note by defeating Gombe United 1-0 in their league opener but they will now have to continue with Nigeria Professional Football League games.

Biffo insists he will put his lads under “pressure” bearing in mind their current position in the topflight as a result of their takeover of the assets and liabilities of Delta Force including having to contend with relegation worries where the Asaba based side are currently placed.

“Before the commencement of the league I made sure I put the players under some pressure by way of engaging them in different pre-season tournaments in Ilorin, Ijebu Ode, Asaba and Kano before coming home to prepare properly for the season.

Our group in the Nigeria National League was not an easy one with clubs like El-Kanemi Warriors, Niger Tornadoes, Mighty Jets and Gombe United but we have another chance to have the opportunity to play premier league matches faster than we expected,” he continued.

After taking up the job, Biffo revealed that he had to start from scratch by erecting a “structure” in the club because he met none. “When I got to Kwara United, there was no structure because I met only three of the old players on the ground and that means we had to get more players to build up a formidable team.

“In order to achieve their goal, the club recruited some of the country’s experienced players when it comes to league football. The players were made to have long-term contracts, which will see them stay and build the club even after they return to the Nigeria Professional Football League (NPFL).

“I engaged the players in a long term contract because we are trying to build a team for the future.

“It is only in Nigeria a club signs over 10 new players every year and we at Kwara United want to deviate from that, so we need to get young players who can stay long enough so that at the end of each season we are sure that we have a bunch of our players and the make few changes.”

Talking about longevity at a club, Biffo has, in the last four years, been at 3 different jobs. He took over from Okey Emordi at Abia Warriors and ended the 2016/17 season with the Umuahia based side before moving to Katsina to handle Katsina United until the end of 2018/19 season before his recent switch to Kwara United.

How long will he be at Kwara United? Hear him: “Coaches in Nigeria always know what to expect. But I believe that a coach will last on a job as long has his results are turning out good and when the result is not good, it is obvious that the exit door is the next page of your contract.

“I will always do my best to work hard for good results so that I will stay in the club as long as I want or as long as I am wanted in the team. I cannot force myself any team so anywhere I find myself I will keep doing my best because that is what matters to me.”

Biffo has a commendable reputation of leading unknown Giwa FC to the premiership before having decent stints with some topflight clubs.

He has also acquired some coaching badges such as UEFA B License in the United Kingdom, BFUT level 2 in Brazil and BFUT Level 1 in the United States of America.