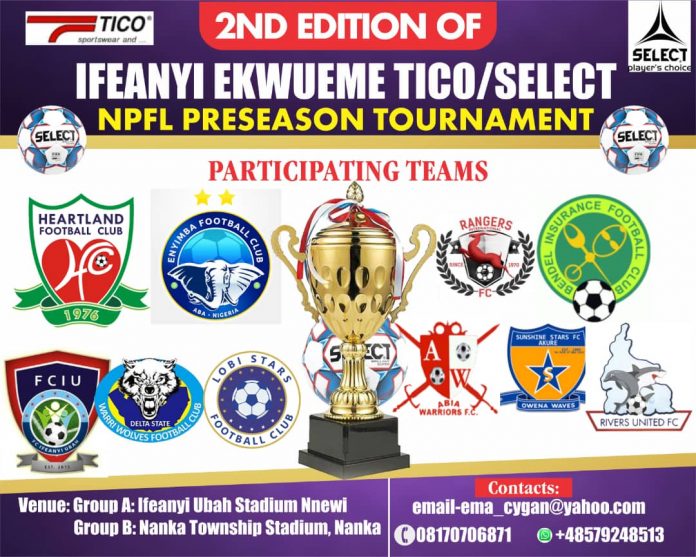 Rangers and Rivers United have hailed the organisers of the 2nd Ifeanyi Ekwueme Tico/Select Preseason Tournament for making sure they play some games that will help them sustain the level of their preparations for the forthcoming 2020-21 NPFL season.

Rangers had a magnificent Monday at the tournament when they beat PXEL (1-0) and Apex Krane (2-1) to cruise to the final having beaten their other two Group A rivals while Rivers United crushed last year finalists, Ingas 3-0 in their opening Group B game plated at UNEC, Enugu also on Monday.

The Director of Communications, Rangers, Norbert Okoli told www.dasportstainment247.com that they were glad to play in the preseason tournament because it will afford them to play some few matches to test their readiness for the start of the season and he thumbed up the organisers of the tournament led by former Super Eagles’ Ifeanyi Ekwueme for all the logistics put in place to ensure a hitch free tournament.

“We have to be grateful to the organisers for putting up a tournament like this to ensure we get some games to play to fine-tune our build up to the season,” Okoli told www.dasportstainment247.com.

“The standard of the tournament has been very high because the seeming small teams stepped up their game too. We didn’t just ran over our opponents as expected. We had to fight very hard to grind out the two wins we had.”

Rivers United defender, Ifeanyi Anaemena also thumbed up the importance of the preseason tournament which he hinted will enable them prepare better for their upcoming CAF Confederation Cup first round, first leg tie with Bloemfontein Celtic next week.

He also praised the organisers of the tournament too for deeming it fit to invite Rivers United.

“I only have good and kind words for the organisers of the 2nd Ifeanyi Ekwueme Tico/Select Preseason Tournament because we have been able to see where our mistakes lie and areas we need to orprove upon before our first leg game with Bloemfontein Celtic next week,” Anaemena told www.dasportstainment247.com.

“We played a tough game against Ingas FC and we expect tougher challenge in the tournament. The organisers have done a good job we are grateful to them.”

The tournament continues Tuesday in Enugu with Goddosky playing against Ingas; Apex Krane vs PXEL Academy and Rivers United vs Goddosky to bring the group stage to its conclusion ahead of Wednesday’s Third place and Final matches at UNEC Pitch.