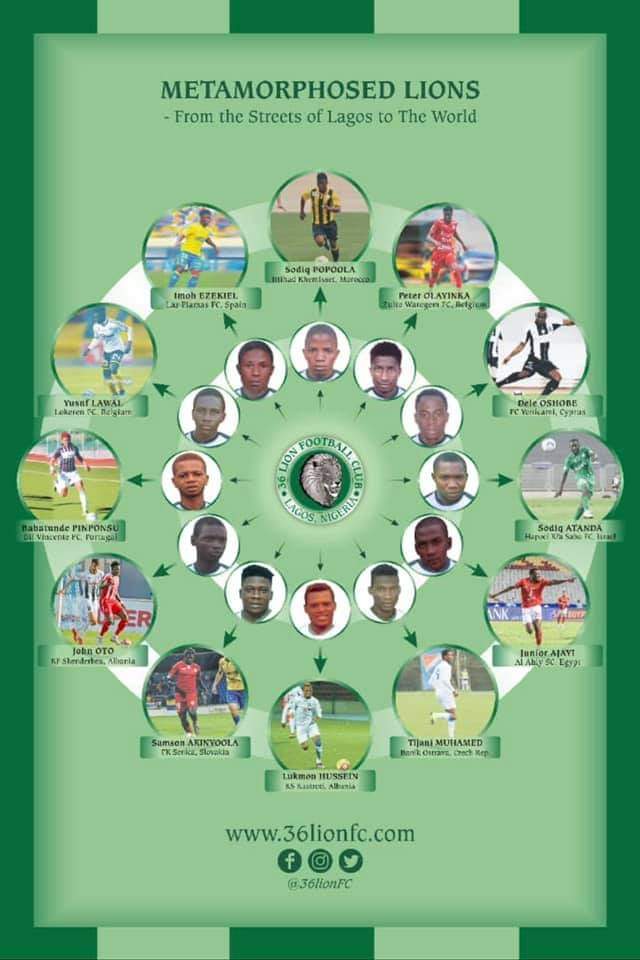 The Chief Executive Officer 36 Lion FC, Hajj Gafar Liameed has stressed that the club’s excellent scouting system which has ensured that only quality talents are presented for possible transfer to top Nigeria Professional Football League (NPFL) and foreign clubs is among the reasons the club continues to receive the adulation of all in Nigeria and beyond.

The owner of the famed 36 Lion in an exclusive interview with www.dasportstainment247.com noted that the club’s aspirations to rank among the top 10 leading academies in the world in the next couple of years ensures that he and his scouting team do not compromise standards to ensure they continue to sustain the trust of their partners both within and outside Nigeria.

36 Lion only last week marked 20th anniversary in a ceremony held in Lagos and Hajj Liameed who recalled their tough start two decades ago, noted that they have had a fanstatic journey thus far despite a few challenges that have emboldened them to continue to aim higher among their comtemporaries.

“The journey has been fantastic so far with a few challenges and come rain come sun we will continue to appreciate God and sing praises to him and thank him always for making us do what we know how to do best thoroughly and truthfully,” Hajj Liameed began in an interview with www.dasportstainment247.com.

“We had a few challenges but we survived it. We consider our record as average right now. We are our competitor. We don’t see ourselves competing with anyone. We set a target and when we reach that target, we will continue to move forward. If you look at my statement (in the social media post) I said the work has just begun because even though we have transferred up to close to 20 players. It is no Eldorado for us. We will continue to work very hard and hopefully every window we will do two to three transfers. It (the transfer) could be in Nigeria or Europe, South America, Asia anywhere they are playing football and they request for our players, we will let them go.

“Our primary market should be Nigeria. Our hope is for Nigeria to get better in all sectors because if Nigeria gets better then if we have 10 players within two windows maybe five will be transferred to top clubs within Nigeria while the other five might be going abroad.”

Shedding more light on what made 36 Lion players to be cynosure of all eyes at every transfer window, Hajj Liameed affirmed that the quality of their scouting system remains their strength which they hope not to compromise for any reason to ensure they continue to sustain their enviable heights in Nigeria, Europe and other continents that request for their players.

“Our strength is our scouting system. Our motivation is self-driven. It is more like ‘what is worth doing is worth doing well’. As we speak we have about 30 coaches all over Nigeria on our payroll. We have our scouting team in almost all the nook and crannies of Nigeria,” the CEO of 36 Lion stated.

“Top talent is not easy to get. We only deal with top talents. We work with coaches from few states and their own programme is to groom players between ages 12 and 16. We will now go to those coaches once a year to go and see what they have put together. If any of the boys they are putting together is good enough for the standard we expected, we will bring such ones to the main centre in Lagos. Top talents are from the grassroots and when we do after going round the country in search of top talents, it won’t be difficult to see several top talents at the centre in Lagos in all departments of the game.”

36 Lion supremo also listed some of the challenges they have had to endure in order for them to remain at the top:

“The challenge is just notably how we move around. Sometime I may want to go and see my boys in their respective zones but the unpredictability of the road transportation system makes the journeys take longer than necessary.

“At times we have take care of most of the boys because they are from indigent background. But our number one challenge is moving from one place to another. We are grateful to the Almight God for aiding us to take care of our wards.”

After reviewing the activities of the last 20 players which has culminated in the transfer of about 20 players abroad, Hajj Liameed said they do not intend to rest on their laurels and he has highlighted some of the major tasks he would like to have concluded in the next five years.

He said topmost among his next five years target include the finishing of the 36,000 square metres’ Lion Arena which will house a football vocational school among other notable projects:

“The projection for the next five years is to finish our Lion Arena which is under construction. We are building a football vocational school. The space is about 36,000 square metres where we have 98 percent football and probably two percent vocational studies for our Lions to have something to fall back to after football. Within the next five years, we hope to finish that.

The youth developer or coach as he wishes to be known as has players like Junior Ajayi, Imoh Ezekiel, Peter Olayinka, Sadiq Atanda, Sadiq Popoola, Tijani Mohammed, Samson Akinyoola, Oto John, and so forth who have passed through 36 Lion FC and have gone ahead to continue to excel in their chosen profession but Hajj Gafar Liameed has vowed to continue to churn out stars through his excellent scouting system.